10 Most Notable Sites of Midtown Manhattan

See where Rockefeller Tree arrives every year for the holidays, visit the amazing Grand Central and take a tour of Midtown to experience it in person. 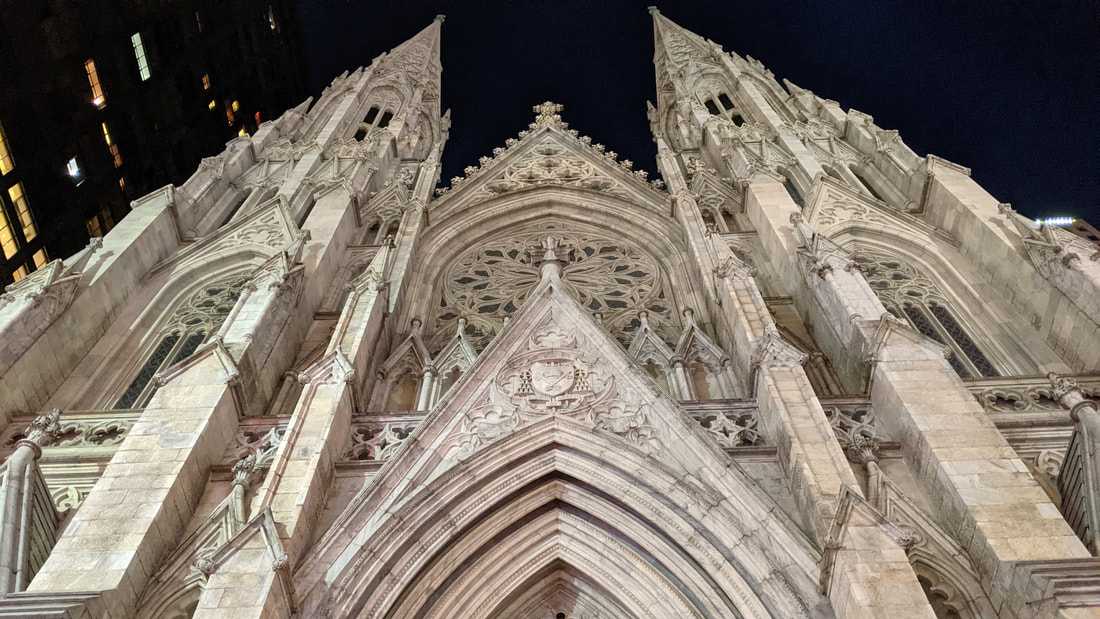 Location Fifth Ave between 50th and 51st Streets
Opened 1879
Where it gets its name St. Patrick Cathedral is named after the patron saint of the Irish.
Why it’s notable It's famous for its spectacular Gothic architecture. Also, it was a bold statement asserting the status of the new immigrant classes as Americans.
Fast fact St. Patrick’s enormous main doors are made of bronze, each weighing 9,200 pounds. They are decorated with the sculptures of local saints and are said to be constructed in such a way that they can be opened and closed with one hand. 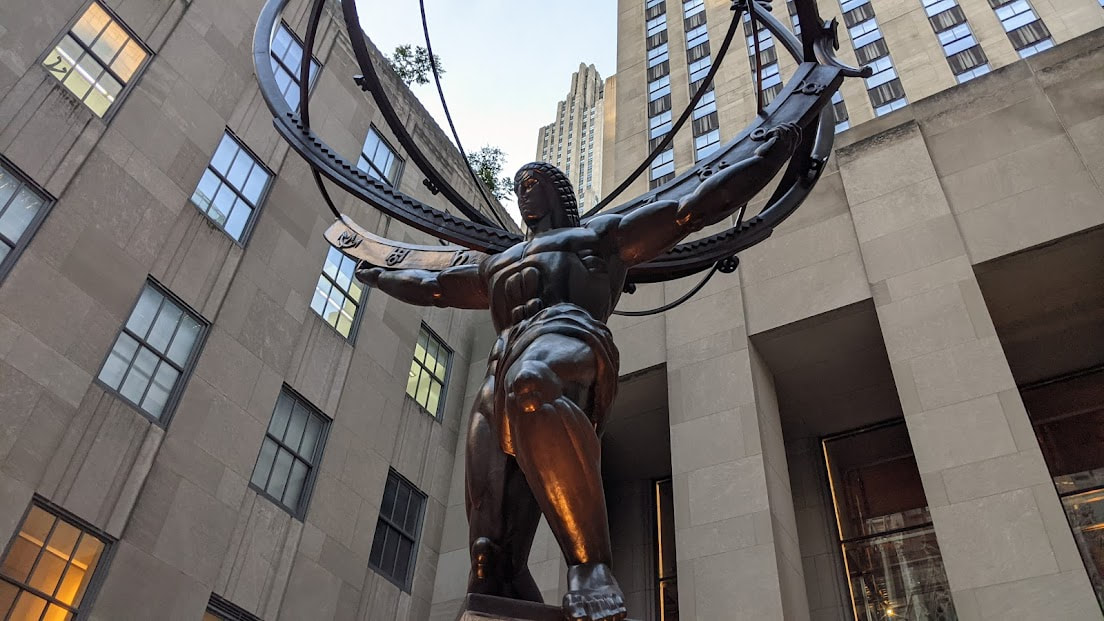 Location Fifth Ave between 48th and 51st Streets
Built 1930–1939
Where it gets its name The Center is named after its founder John D. Rockefeller Jr.
Why it’s notable  It's the largest private building project ever undertaken in modern times. It was built during the Great Depression employing  over 40,000 people!
Fast fact On the off chance you get lost on the island of Manhattan and need to be guided by the stars, look to the Rockefeller Center Atlas on Fifth Avenue: fleur-de-lys on the sphere’s north-south axis points to the North Star as seen from New York City! 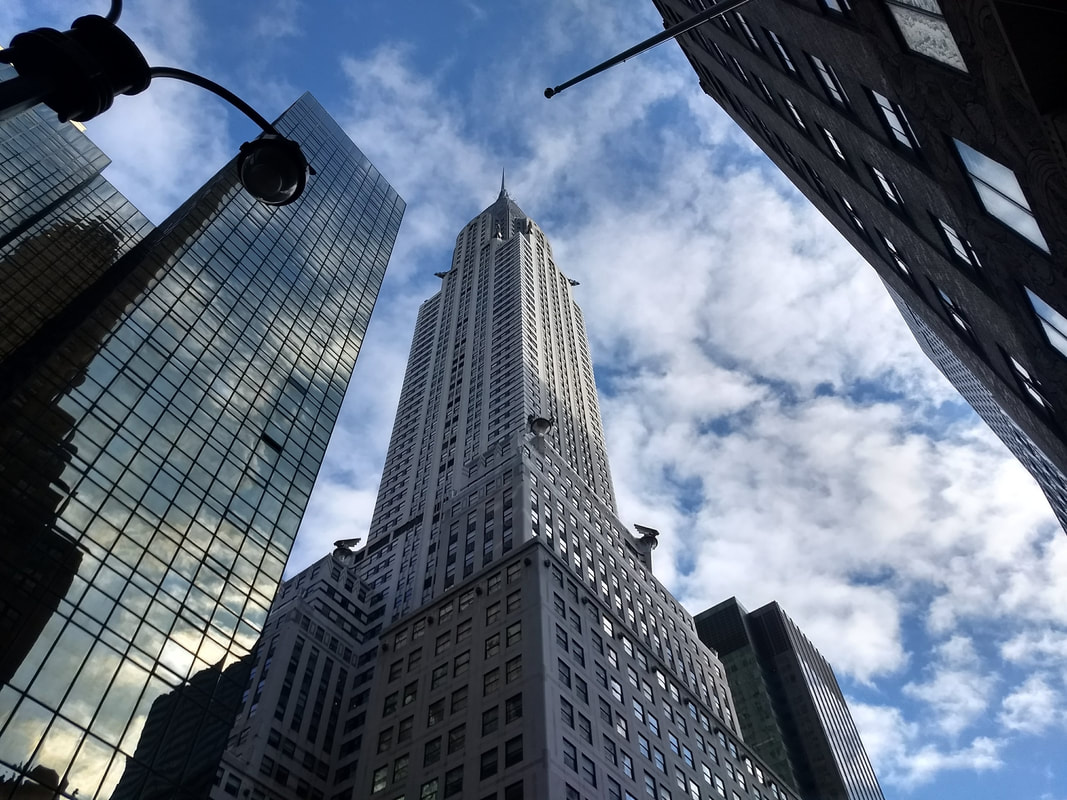 Address 405 Lexington Ave
Opened 1930
Where it gets its name The building was constructed by Walter Chrysler as the headquarters of the Chrysler Corporation as well as the company’s main advertisement.
Why it’s notable One of the most beautiful Art Deco buildings in the world, it stood the tallest in the world for 11 months
Fast fact Carrying the automobile theme, it shines like a newly bought auto and features winged Chrysler radiator caps on the 31st-floor, and copies of the 1929 Chrysler eagle hood ornaments on the 61st floor. 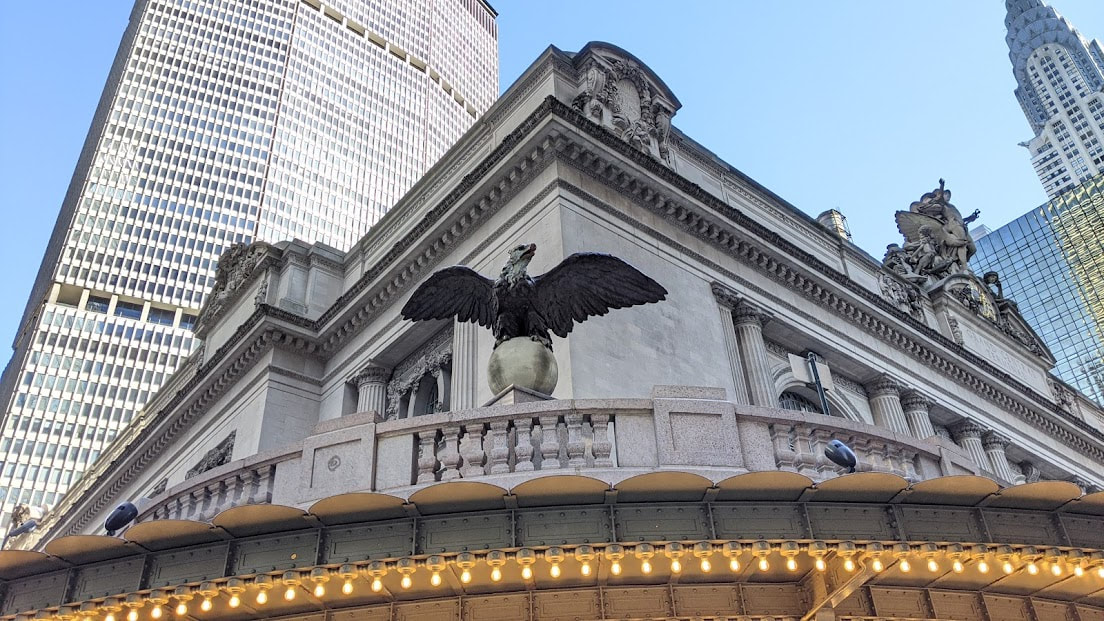 Address 89 E 42nd St
Opened 1913
Where it gets its name  It’s a Terminal not a station because that's where train lines terminated.
Why it’s notable Not only it's an architectural marvel, it was the first electrified train station in the world. With 67 tracks and 44 platforms, Grand Central is still the largest in the world by the number of tracks and platforms.
Fast fact A barbershop for men that existed at the terminal in 1913 boasted that the customer could be shaved “in any one of 30 languages.” 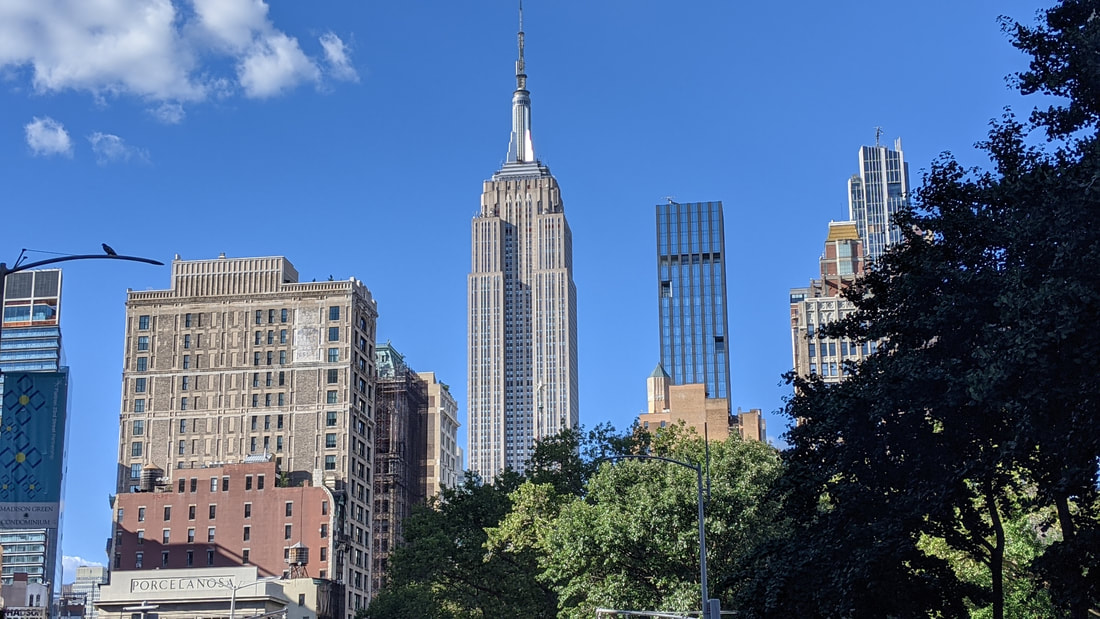 Location Fifth Ave between 33rd and 34th Streets
Opened 1931
Where it gets its name Empire State Building is named after "Empire State", the nickname of the state of New York
Why it’s notable Billed as the Eighth Wonder of the World at its opening, the Empire State Building broke records as the tallest in the world, the first to have more than 100 stories, and the one to be constructed in a record time of one year and forty-five days.
Fast fact Completed in 1931, during the Great Depression, it stood largely vacant and became known as the “Empty” building. In a story more unbelievable than a Hollywood movie, it was saved by… a Hollywood movie! After King Kong climbed its spire in the 1933 production, the Empire State observation deck became a major tourist attraction. The income collected from tourists’ visits allowed the owners to pay taxes on the building until the 1950s when the economy turned and the Empire State could function at its intended capacity. 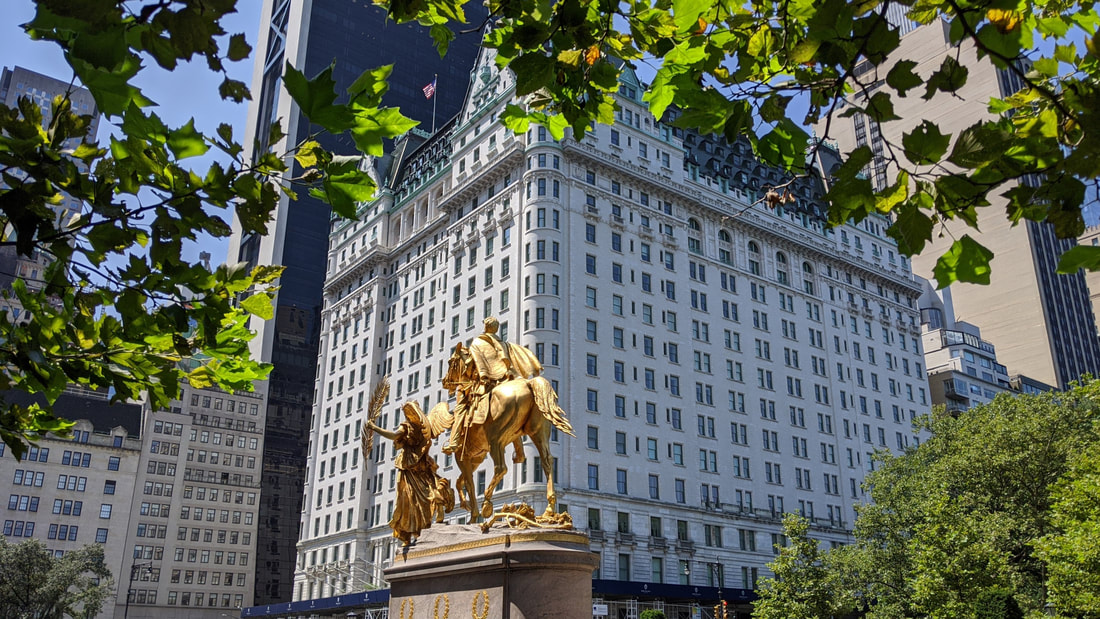 Location Fifth Ave between 58th and 59th Streets
Opened 1907
Where it gets its name The Plaza bears the name of the earlier hotel that used to occupy the same spot
Why it’s notable When opulent The Plaza opened, it was hailed the “greatest hotel in the world.” The Plaza was designed by Henry Janeway Hardenbergh in the style of an opulent French Château and located in the most fashionable residential section of New York City during the Gilded Age.
Fast fact One of the most notable spaces is the famous Palm Court, known for its striking glass ceiling which filters light into the restaurant below. The Palm Court was a setting for a notable scene when famous British actress Mrs. Patrick Campbell lit up a cigarette, which was considered scandalous at the time. She was politely asked to put it down but refused, stating that “This is a free country and I shall do nothing to change it.” 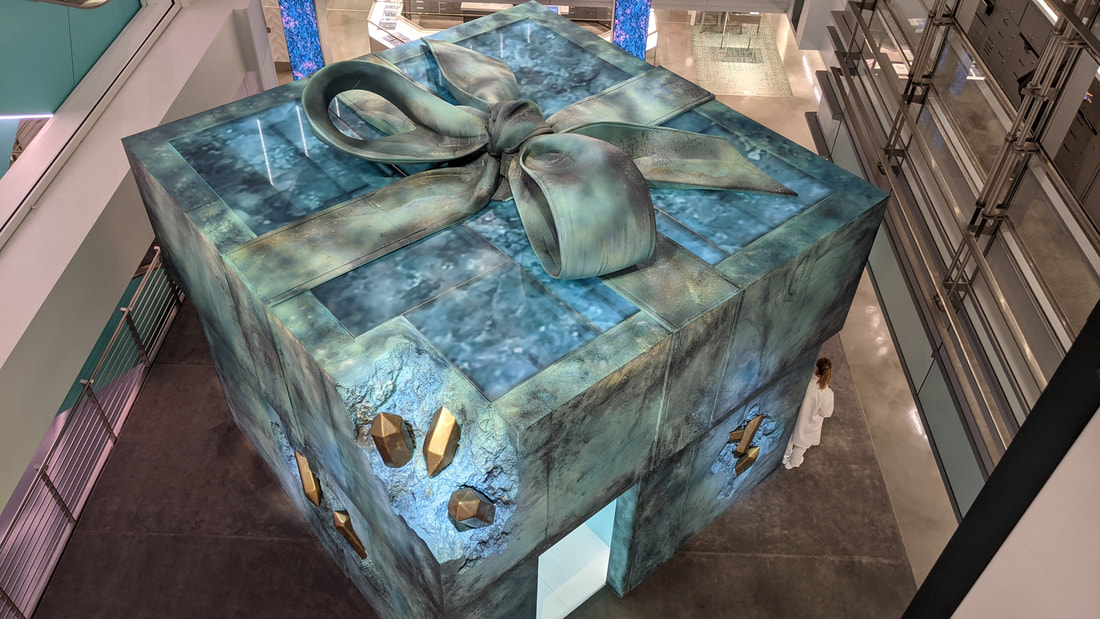 Location 610 Fifth Ave at 57th Street
Built  1940
Where it gets its name Tiffany's is named after its founder Charles Lewis Tiffany
Why it’s notable When opulent The Plaza opened, it was hailed the “greatest hotel in the world.” The Plaza was designed by Henry Janeway Hardenbergh in the style of an opulent French Château and located in the most fashionable residential section of New York City during the Gilded Age.
Fast fact “Breakfast at Tiffany’s,” a 1961 movie based on a novella by Truman Capote, added a soft glow of romance to the store’s dazzling reputation. The delicate figure of Audrey Hepburn in a little black dress peering through Tiffany’s window while eating a croissant to the sounds of Henry Mancini’s “Moon River” forever linked the name Tiffany with the beauty and longing for love. 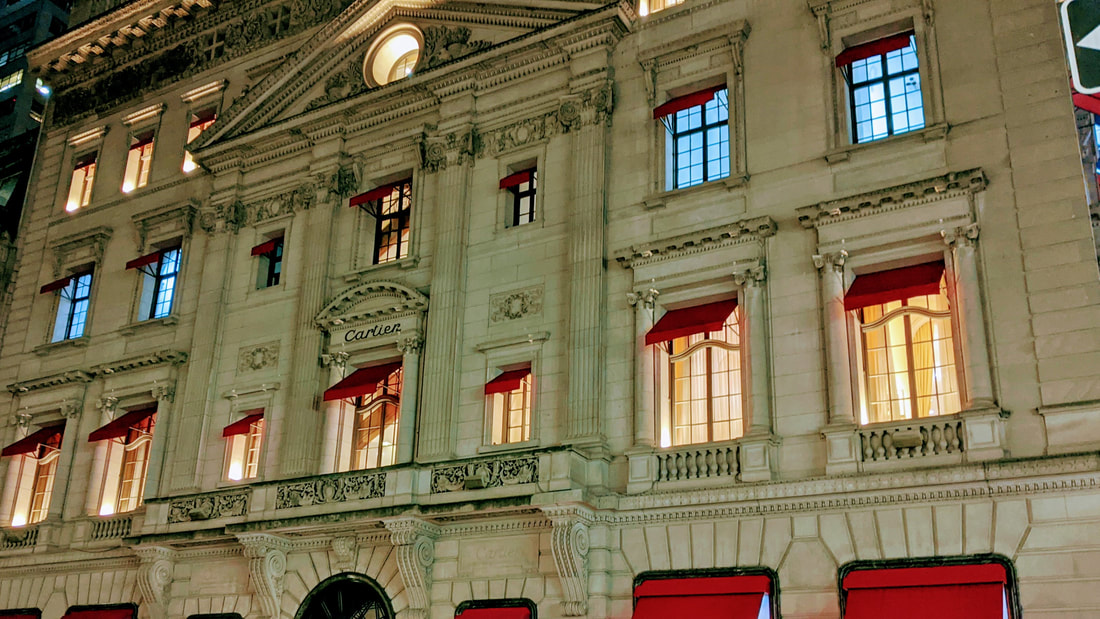 Location 653 Fifth Ave at 52nd Street
Built  1905
Where it gets its name The mansion was bought by Pierre Cartier, a French jeweler, to house its flagship store in New York
Why it’s notable It's one of the very few remaining Gilded Age mansions that used to line 5th Avenue still standing today,
Fast fact The mansion was bartered to Pierre Cartier for a million-dollar string of pearls desired by the wife of Morton Plant, the mansion owner. 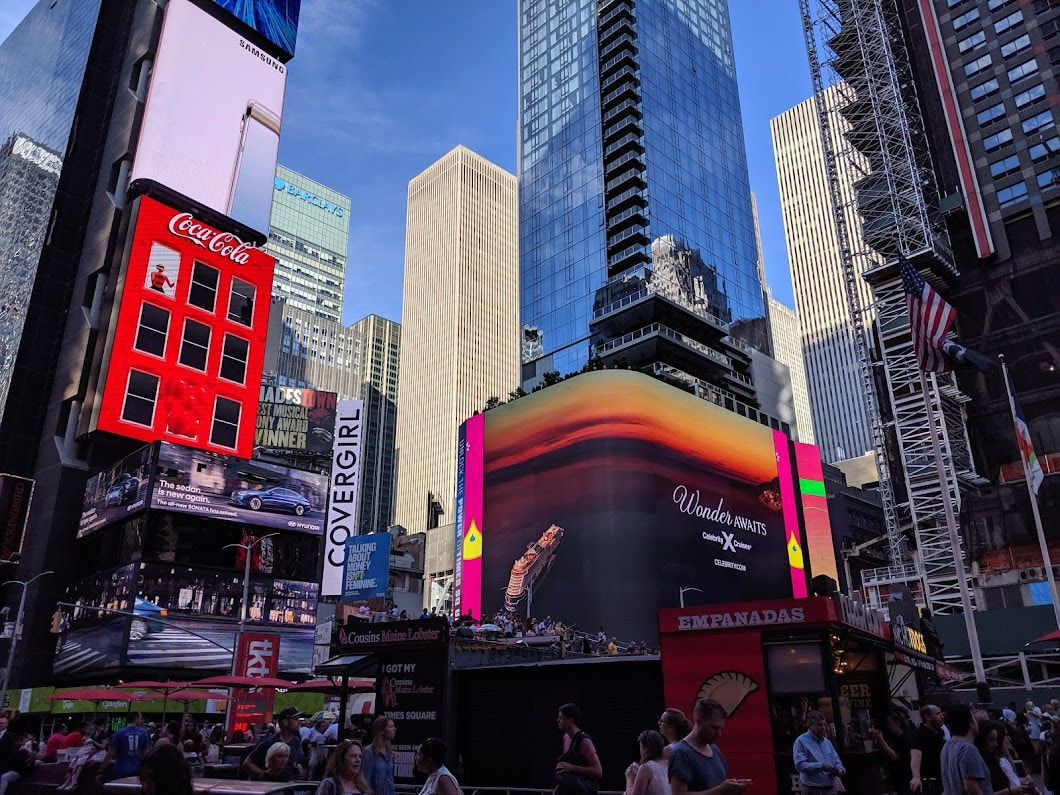 Location Times Square, Broadway between 42nd and 47th Streets
Opened  1904
Where it gets its name Times Square is named after newspaper New York Times that moved here in 1904
Why it’s notable With typical modesty, the New Yorkers call Times Square 'The Crossroads of the World'. If it's not central to the whole world, it is pretty central to the island of Manhattan. Times Square is located in the heart of New York Theater District, hosting around 40 Broadway theaters.
Fast fact Even though it's called a square, its shape is a bowtie - very fitting for the Theater District